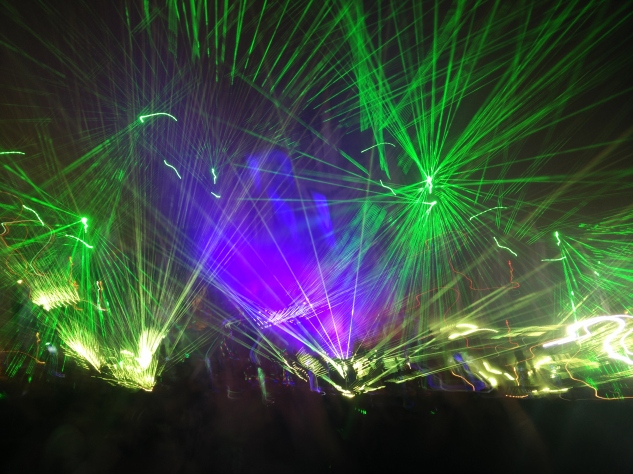 Since my last (and first) entry in this series, I’ve had the pleasure of attending two important events in the continuing development of the electronic music scene in China. First up was Budweiser Storm Festival Shanghai, a two-day festival held at the beginning of October in the Xuhui Greenspace in Shanghai. Featuring the likes of electronic dance music heavyweights such as Tiesto, Skrillex, Laidback Luke and Blasterjaxx, Storm was certainly the most internationally oriented festival I’ve attended in China so far.

Despite great lineups at Bougainvillea and Jungle before it, both Shenzhen festivals had a distinctly Chinese flair. I can’t attest to the quality of Storm Shanghai during its previous two annual iterations, but this year’s festival felt much more like what I grew accustomed to back in the United States. Single beer limits (Jungle) and busloads of kindergarten children (Bougainvillea) were nowhere to be seen. Meanwhile, the crowd was significantly more internationally diverse, with just enough Chinese attendees to remind me was standing inside one of the biggest cities in China. I suspect at least a good deal of these differences from Shenzhen festivals can be attributed to such a demographic difference, not to mention the fact that Storm is fairly well established at this point and so can draw better acts and, consequently, bigger and more passionate crowds.

Being somewhere between sympathetic and supportive of the anti-EDM mentality gaining steam amongst more veteran fans of electronic music, I found the “performances” of big name acts like The Chainsmokers and Yellow Claw groan-inducing. My idea of being an effective DJ doesn’t include screaming at the crowd to jump at the next drop or demand everyone sit on the ground at the same time, but if that’s your thing then sticking to the higher-profile “Messier Stage” would have probably been a good strategy.

While I, admittedly, spent a bulk of my time at the Messier Stage for personal favorite producers like Above & Beyond and Aly & Fila, I did make significant forays over to the smaller and more intimate “Makarian Stage.” I knew in advance that I would forsake most of Laidback Luke and Blasterjaxx’s sets in order to see Paul Oakenfold, but as the second day wore on I found myself spending more and more time there, thoroughly enjoying the pure house sets of Chocolate Puma and Shiba San.

Dutch superstar DJ Tiesto closed out day one of the festival with a predictable but enjoyable romp through recent electro house co-productions on his label Musical Freedom, with Skrillex holding his own as support. I was more excited to see progressive trance act Above & Beyond during the night of day two. As an avid fan who had seen them in early August shortly before hopping on the plane to China, their set was mostly familiar but also included newer productions debuted during their recent stop in Australia, pleasing me as a hardcore fan.

While Avicii was originally supposed to perform on the second night, he cancelled and was, much to my chagrin, replaced by rapper Flo Rida. I watched about twenty minutes of Flo Rida shouting at the crowd and pouring champagne over his shirtless body while his music videos played across the stage behind him. Unfortunately, he immediately preceded Above & Beyond and so I had to return before he finished his spectacleand subject my eyes and ears to added abusein order to jockey for a decent position in the crowd.

Fast forward three weeks to Friday, October 23rd, when my Storm fatigue finally faded enough for me to stomach overcoming my Coco Park fatigue to see UK radio icon Pete Tong, host of seminal programs such as Essential Mix and Essential Selection, perform behind the DJ decks at Pepper Club. Tong’s set was as classy as I expected, if a little obscure. He read the crowd’s vibe nearly flawlessly, in my opinion at least, and perfectly blended one groovy house tune into another. My phone was overheating from constant Shazam use, a rare occurrence for me in club environments. Shunning mainstream producers and even labels, Tong instead opted to play tracks from the likes of Worakls and Purple Disco Machineand managed to keep the dance floor crowded and thrumming for the better part of two hours.

After such a flurry of big events to mark my arrival in China, I expect the schedule to clear for the winter. The only noteworthy event I’m aware of is Budweiser Storm Shenzhen, first-year sister festival to Storm Shanghai which takes place during the weekend of November 21st and 22nd at the Longgang Sports Center. Featuring the likes of Kaskade, Showtek, Afrojack and Galantis, I expect to be well held over until the next big event comes up on my radar.