On Sunday, September 16 Typhoon Mangkhut, the strongest storm in PKU Shenzhen’s history, hit the campus. Sustained winds reached well over 200 km/h, and storm surges on the coast were some of the highest ever recorded.

Before the storm arrived, analysts in neighboring Hong Kong correctly predicted Mangkhut would be the most powerful storm in the history of the city’s record-keeping. Students and staff at PKU Shenzhen took full precautions: bikes were sheltered, buildings locked down, and convenience store aisles cleared of essentials. Elsewhere around the city, the metro stopped service and indoor shelters reached a capacity of over 130,000 adults and children.

Typhoon Mangkhut took nearly 10 hours as it tore through Shenzhen. But thanks to the careful precautions by the municipal government and everyone on campus, there were no serious injuries sustained on campus and no fatalities recorded in the city.

Still, the damage done to our beautiful home was severe. Students woke up to a very different campus on Monday morning. Though classes were canceled, there was no joy to be felt looking out the windows to the buildings in need of repair and dozens of downed trees.

Monday morning, the enormous effort of repairing and restoring had already begun. Police officers, building maintenance, construction crews, landscape workers, and canteen staff all mobilized to help return the campus to its former beauty. We thank them for their commitment and sacrifice. In their work, and in the care that students took to reduce and document this tragedy, we saw the fighting spirit of PKU is still strong. 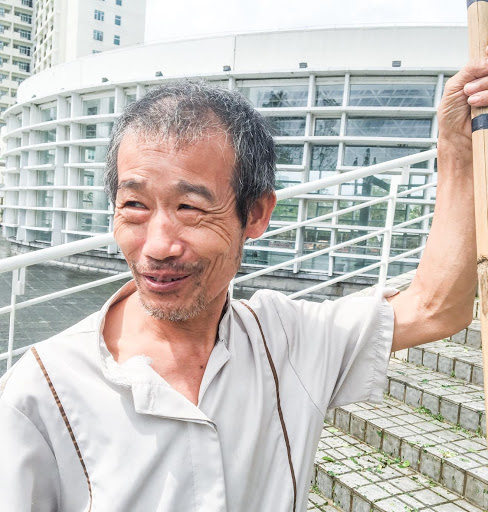 “The typhoon ‘Shan Zhu’ increased my workload, but it was OK. The typhoons don’t come every day, it can be cleaned in a day or two. The campus will soon be back to normal.”

“It’s past 10 PM now. We just came from Building 3. Don’t worry, the elevator of Building 1 will be repaired immediately.  You can see right now we’re doing a final test. You won’t have to walk upstairs anymore. But we have just done what we should do.”

“It’s ok. The typhoon is already past, outside is cooler than indoors, sitting here is comfortable.”

Photos and interviews by Mei Siyu