“China, please be good to me.”

This is what was echoing through my mind in the final few hours before I officially arrived at Peking University Shenzhen Graduate School to begin my exchange. That day, I had spent 14 more hours in a train. Those 14 hours felt like nothing compared to the previous few weeks of travel. Shenzhen was the last stop on my trip which began back in Poland. In total: 23 days, almost 12000 kilometers, and 3 countries. I traveled by hitchhiking, trains, buses and, just once, I took a plane (to reach the starting point of my travel, Saint Petersburg, Russia). After all of that, I was about to arrive in my final destination.

My name is Ewa. I am Big Data Analysis student from Warsaw School of Economics. I come from Poland, but for the first semester of the 2018-2019 academic year, my home is here in China.

Many people both at home and in China are interested in my reason for coming here for exchange; there are actually two. First of all, for a student of a business related major, witnessing China’s development from the front row is a great opportunity to understand the fascinating changes happening here. Second of all, I consider living here as a challenge for myself. It is not the first time in my life that I have lived abroad. However, this is the first time I have lived in a country where I don’t speak the language and I have a large amount of cultural learning to do. If I am not even able to eat noodles with chopsticks how can I survive here?

Whereas others who are new to China may try to avoid the frustration of noodles and chopsticks, my strategy involves watching hundreds of noodles slip through the chopsticks. Maybe one day soon they will start to take hold. So, you may ask me why I didn’t take a plane. Within 10 hours of saying goodbye to my parents in Poland I could have been here in Shenzhen. The answer is really simple. I knew I could use the time; so I visited Russia, Mongolia and China. Choosing a plane, I wouldn’t have been able to experience everyday life in countries I had flown over in the air. By going my way, it was 23 days and over 10,000 kilometers of painstaking learning and unforgettable experiences.

Two of my friends and I traveled more than 4 days by the Trans-Siberian Railway, crossing a huge part of Russia with 49 other people in our 3rd class carriage. It is the cheapest mode of transportation through Russia, the country with the largest area in the world. Most of the passengers do not decide to travel by the train because they have nothing better to do with their free time but for practical financial reasons.

Being stuck in the same small place for a brief window of time turns the compartment of strangers into a tiny community. People’s stories interweave for a moment and then diverge again. A group of youth who were traveling by train for more than 4 days just for a hiking camp, a cute couple of retirement age who always welcomed companions in this misery with a smile (even if you accidentally bumped into their bunk in the middle of a night while going to the toilet); a man who disapproved of everybody within sight and divested each of our attempts at contact; a typical businessman who didn’t fit in with the tracksuit fashion that ruled in our temporary home—all of us lived together. It has to be mentioned the most important person in our community called in Russian provadnica (direct translation into English: a guideway). She was far away from being just a conductor, she was like a nanny running all of the adults around with an iron fist. Even the toughest guy would meekly leave whatever he was doing once Natalia decided it was time to turn out the lights in the carriage and sleep.

On the verge of tears, we left them in Irkutsk to camp at the Baikal Lake. Baikal Lake is the largest lake by volume in the world. It shames me to say it, but I didn’t swim there, it was much too cold! From Russian Buryatia, which is inhabited by the major northern subgroup of the Mongols we did more than 300 kilometers in a military truck to actually reach the border of Mongolia. Few hundreds kilometers later, I found my place at the Gobi desert. By my place I mean a small ger (or yurt) where we lived for a while. If it sounds remote and hard to reach, its because it was! To take a shower we had to walk to another village passing grazing camels along the way. I am not complaining at all. Wild animals are definitely a highlight of visiting Mongolia. It didn’t feel like it, but our destination, China, was just a few hundred kilometers from where we lay in a ger next to grazing camels.

All those experiences sound pretty cool, right? The thing that you should always keep in mind is that traveling like this is not always as awesome as it looks in the travel photos you see. It isn’t always clear if the new experiences are worth the energy, expenses, and sometimes pain.There are moments when I ask, “Why the hell have I decided to do it again? Why didn’t I listen to my dad and let him buy me a plane ticket?” He would probably have few less wrinkles if I did not indulge my impulse to travel.

For example: It was a few minutes after midnight. A few hours ago I had left my travel buddies in Beijing. I was alone, sitting on a filthy floor, next to a toilet, somehow also directly under a pile of garbage. Every few minutes, right when I would stop thinking about how miserable of a place I was in, somebody would come throw a new handful of trash on the pile above my head. I was thinking about the trash and hoping my future here is much brighter. Would everything come crashing down? It was obvious that there was so much I didn’t know. I felt surrounded by thousands of men. I realized there was an unwritten rule that women sit along a corridor and men occupy a space around the toilet. Of course I am the only one who didn’t know about this.

I was fully aware that I was the only non-Chinese person in the train, and the train had more than 20 carriages. People were staring at me and did not bother to pretend otherwise. I was the main topic of conversation all around me and no one was hiding it. All of the sudden there was quite a big circle around me. From time to time they asked me questions in Mandarin and did not care when, with my broken Chinese, I tried to say that I did not understand. I couldn’t discern if they were discussing or arguing. I have a feeling that in the most common of circumstances Chinese people might still speak loudly and with strong emotion. Somebody took a photo of me. I got used to most of the things, but my first experiences in China made me feel insecure.

I must have looked completely lost as well, because at that moment a young boy who was occupying a space next to me discreetly whispered to me in English not to care about people around so they will finally find another topic of conversation. Suddenly, someone else offered me a small chair so I would no longer need to sit on the floor. It was so typical for people in Chinese trains to use them that when I was given one of my own, I almost started to feel like I belonged. The long stares I was getting gradually became shorter and shorter.

This situation describes perfectly my first impressions from China. Being here is like being on a roller coaster. One moment I feel like a lost child and another like the only thing that differs me from Chinese people is that all the men showing off their bellies still doesn’t make any sense to me  (It wasn’t even warm in this train and I’m from Poland!).

There is no other country like China. I have never been somewhere where somebody you approach on the street for help generously stays with you as long as she/he is sure that 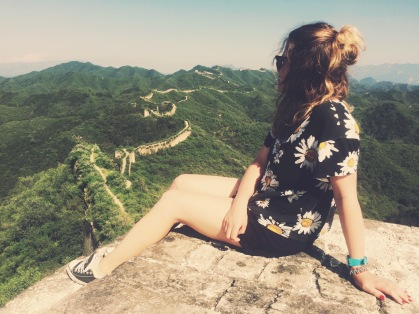 you are all right, even if that means guiding you to your hostel or helping you convince staff to let you buy train tickets that are sold out. My trip wouldn’t be the same without the strangers who helped us when Google Translator and Google Maps weren’t helping. Ironically, it wouldn’t be the same without the people who have stared at me or shouted at me something in Chinese. Because the nice boy who gave me the great advice of ignoring those around us and the generous guy who offered me the chair would never have approached me without this discomfort.

All the amazing moments I have experienced during the last 3-5 weeks, wouldn’t be possible without people. Even though there are times I do not understand people and get stuck behind a language barrier, there are still connections that happen that I would never want to be without.

I quickly learned that in Chinese trains people smoke and throw their cigarette butts on the floor. I dreaded showing up at my new university smelling like an ashtray. But, I also hadn’t showered in the last 48 hours. I wasn’t going to let these concerns affect me. My first days in China I spent in a nice hostel in Beijing with friends, but we had weaned ourselves off such luxuries as running hot water. When I had the choice between spending the last night of my journey in a hostel or sleeping under the stars on the Great Wall of China, I didn’t even think for a second. My legs, disapproved of this decision. They had already suffered from muscle sores and many small gashes. I had to climb for a few hours to reach “our” guard tower on a non-restored section of the Great Wall. But believe me, it was worth it. We were completely alone at the most popular tourist attraction in the most populated country in the world. At that moment, the Great Wall of China became not just a tourist attraction to me. I believe it is the most spectacular thing man has ever created or could lay eyes on. Up there, a vast expanse of nature spreads out before you and the wall stretches far off into the horizon. It made China feel timeless，but new and dear to me at the same time. I thought of the wall, my long journey getting to the wall, and crossing over to reach Shenzhen. My journey had been so beautiful. It tested my limits, and I had no doubt now that I wanted to push forward.

China, please be good to me. So far you have surprised me a lot and I hope you will keep that going. People should take part in exchange opportunities for the challenge and the excitement; step out of their comfort zones, even if this is a bittersweet process. 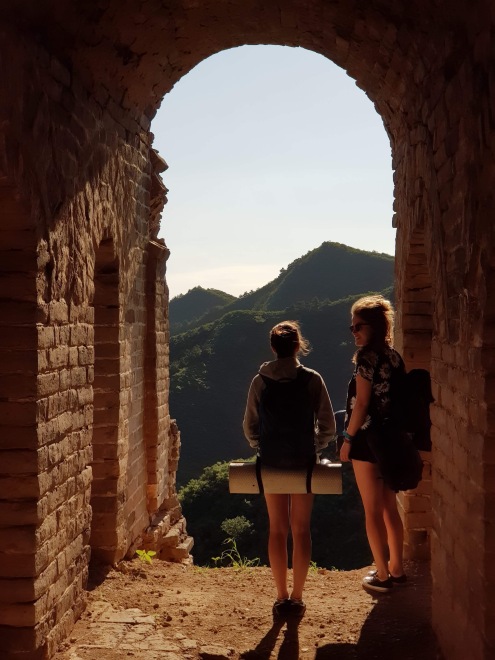