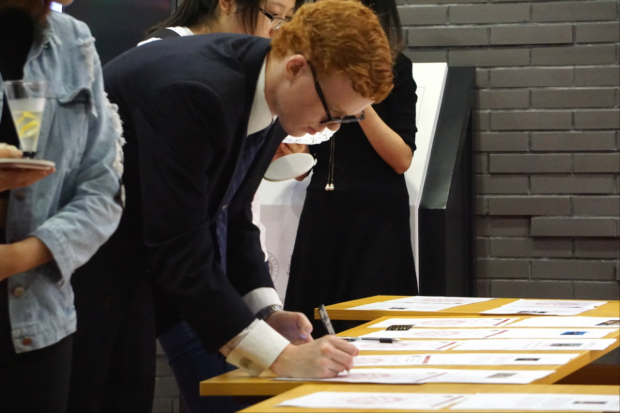 A Hong Kong Victoria Harbour dinner cruise for up to 15 students, classic Chinese calligraphy written by Chancellor Wu Yundong, a home-cooked American southern-style dinner with Dean Yandle, private plane from Geneva to Cannes, Korean barbecue accompanied by Professor Kang’s piano performance at a Korean barbecue restaurant. These were just a few of the items up for auction during “Bid for a Change”, the 3rd PILF Public Interest Auction held at the new building of School of Transnational Law on April 15.

Public Interest Law Foundation, referred to as PILF in shorthand, is a student run organization based on STL to promote students’ public interest law practice. Its annual event is the public interest auction to raise fund for students working in public interest positions during the summer. All items for the auction are donated by the faculty members and students in Peking University. Up to now, PILF auction has been successfully held twice and raised more than RMB 100,000. The annual PILF auction has become one of the most influential and largest-scale student activities in STL.

Around 7 pm, bidders arrived one by one, received their bid card and enjoyed the party first. There were two parts of the auction: silent auction and live auction. The items in silent auction were mostly from students, and they donated almost everything, including toys, tour guide service, wake up service, Yoga courses, and so on. The most expensive item from students was a Chinese calligraphy written by one of 1L student, Su Quan. The No.2 bidder gave the highest price at RMB 1500. Professor Feldman’s dim sum was also very popular and eventually was sold at RMB 1600.

The live auction portion of the night was obviously more exciting and attracted more attention. The items of the live auction were mostly donated by the faculty and staff members, from outings with faculty members to rare collections to live performances. One of the most expensive items, private plane from Geneva to Cannes, was sold at RMB 10,000, which was donated by Professor Eile Vannier. As usual, the item donated by Dean McConnaughay, the Victoria Harbor dinner cruise, was one of the items people were always looking forward to. Eventually it was sold at RMB 10,300 by one of 1L student. This cruise will be shared by 15 people.

Professor Buhi and 1L student Evann Wu served as auctioneers for this year’s live auction, and entertained bidders with their enthusiasm. During the break, members of Hip-hop dance club, led by one of the 2L student Kelly, gave a brilliant hip-hop dance performance. Meanwhile, cocktail, beverage, and alcoholic drinks are served. Professor Levene also volunteered to be the partner and made the cocktails during the party. Dessert, fruits, and snacks were provided at the bar counter, where bidders ate, drunk, talked with others, and had a lot of fun.

“This year’s Public Interest Auction is so thrilling,” said one of 1L students, posting many great photos of this night in her Friend Circle. Another 3L students commented, “every year this time I will realize how many rich people are hiding around me.” Many 1L students volunteered in the weeks before the event, and there was tremendous support from alumni, professors and staff members of STL. “We all had a great time tonight. We are so grateful that the auction can bring the School of Transnational Law together, have fun together, and meanwhile support the public interest law work of students!” One of the organizer said.

At the end of the auction, Professor Buhi and Evann announced the total amount achieved: RMB 106,214. All of the money will be used to support students to go abroad and work for public interest law careers. So far, PILF has funded seven students to have internship in four countries, including United Nations Development Program (UNDP), United Nations Commission on International Trade Law Regional Centre for Asia and Pacific (UNCITRAL-RCAP), American Civil Liberties Union (ACLU) of Los Angeles, ABA‘s Rule of Law Program in Beijing, ABA Justice Defenders Program in Washington D.C., Earth Rights in Thailand. It will be seen that more and more students will use the funds raised by the public interest auction to devote themselves to public interest careers.