“Hi Kevin!” exclaims the barista as we come up to the coffee counter to order. Everyone knows Kevin: faculty, staff, both international and Chinese students—even the Starbucks baristas all know him by name. I’ve been here for three years and still have “foreigner” written on my to-go cup in lieu of anything familiar. But this is a true testament to the friendly and open nature of PHBS management student, Kevin Kurnia.

Hailing from a rural city in Indonesia, Kevin moved to Jakarta in 2010 to pursue a degree in informatics engineering at Pelita Harapan University.  At the end of his program, he decided that working with people piqued his interest more than computers ever could. He eventually enrolled in a master’s degree program in business management where he came to PHBS on a semester-long exchange. He enjoyed his exchange experience so much that in August 2016, Kevin returned to PKU Shenzhen as a full-time management student.

Obviously, coming to that decision had many different factors in the mix. For Kevin, one of these particular factors was his Chinese family tree. “My grandfather moved from China to Indonesia, where he and my grandmother had my mother.” So not only did he choose to move to China because he enjoyed the program, he also moved to discover his roots and culture first-hand through everyday life in China. Ironically, this adds another layer of complexity on top of the language barrier that most international students already face. “Due to my looks, every time I ask for help with calling taxi drivers, [the security guards] stare at me for five seconds in confusion because they assume I can speak Chinese,” he laughs. He adds that the situation resolves itself once he starts speaking in English.

Though Kevin credits the language barrier as one of the more challenging aspects of life in China, he wants to assure all prospective students that possessing no Mandarin Chinese skills is nothing to fear. He says that not only is Shenzhen a young city where you can often find many people with basic English skills, but also “the school has built an environment that supports non-Chinese speakers. With the [Campus Advisor] Program,  友connect, and international staff, there are no big problems for me, even though I can’t speak Chinese.”   He adds that shops in and around University Town are a little more accustomed to international students but there’s nothing like having the Pleco app (offline Chinese dictionary app) ready at all times.

As for life as a management student at PKU HSBC Business School, Kevin’s study habits are a thing to be glorified.  His time spent studying in Starbucks for the Strategic Management course is exactly how he came to be on a first name basis with the baristas. That coupled with his enrollment in a few other courses known to be more intensive. “Although I’m fully exhausted from taking that class, I really enjoyed the cases that Professor Kevin Chastagner provided for us,” adding that the moderated discussions helped him to think creatively. Another one of his favorite courses was Corporate Strategy by Professor James Yen.  “Even though that class was also quite busy and challenging, it was one of the strongest drivers behind my transfer to PHBS.” The class had such an effect on him that he became a teaching assistant for the same course later on, which also doubled as a way for him to get to know his future thesis adviser. 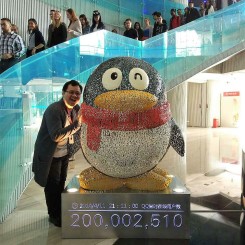 When Kevin isn’t studying somewhere on campus, he likes to eat at different restaurants all over the city. Just a few days before our interview, he went out with some international students to try a Turkish restaurant downtown. “We have a WeChat [Chinese messaging app] group called ‘Food.’ Sometimes someone will post about going out to eat together,” he said before adding that the international student community is very welcoming and has no sense of exclusivity. As for making friends with Chinese students, students on both sides will tell you it’s a different story.

International students are bonded by their foreign status and newness to China, while Chinese students’ lives are business as usual. But as someone running in friend groups both international and domestic, Kevin has some advice for those looking to break through any perceived barriers. “You need to be proactive in approaching your Chinese classmates. They are nice and they are open but many of them are quite shy. But once you break through and get the ball rolling, they invite you to dinner, to go out, to explore; they are really, really welcoming!” He adds more specifically that it’s best to take advantage of the programs and activities that the school holds for these purposes.

After China, Kevin has his eyes on pursuing a doctorate degree in the United States, where he had the chance to scope out a few universities this past summer.  He says eventually he will take over the family business back home in Jakarta, but in the mean time he might stick around in higher education and become a professor. For now, Kevin is hitting the books for a thesis-focused year and in his spare time is planning events as a sitting member of the International Association Board.

To learn more about PHBS, see their official website here.